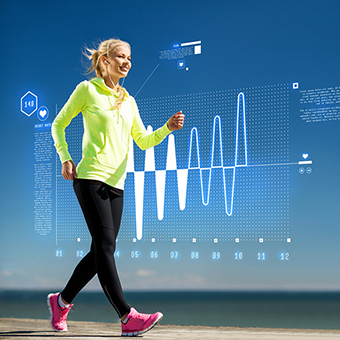 Smartphone-connected watches have come a long way since the introduction of heart-rate monitors and GPS trackers. In the last decade, the industry has been dominated by brands such as Polar, Garmin and Timax, offering a variety of styles often with accompanying electrode chest strap which would “talk” to the watch and output your pulse in real-time. Indeed, HRM watches with chest straps were considered the most accurate. Recently, however, with technological advances, monitors no longer require the chest strap and companies are developing smartphone applications that allow you to use Bluetooth technology to record your heart rate to your phone.
The only problem with the traditional HRM watch, is that it is only worn on occasion and therefore, the market for the product is limited to fitness enthusiasts.

“With global smartphone sales surging 42.3% in the last fiscal year, it would seem as almost everyone, everywhere, is a little obsessed with their mobile device. Certainly, should you drive past a bus stop you’ll note almost all waiting commuters are glued to their smartphones. And, with ever-increasing societal awareness of health and fitness, the market for smartphone enabled fitness devices is growing rapidly.

Although 968 million smartphone units were purchased last year, sales in mature, more profitable markets actually slowed. Research house Canalys predicts sales of smartphone-enabled bracelets will surge to 17 million units this year, and 45 million in 2017, offering a chance to pry open the wallets of the mature consumer markets who are reluctant to update their devices.

At the industry’s biggest annual fair, the World Mobile Congress in Barcelona, a shift in industry leaders was evident with brands such as Samsung, Huawei and Sony Mobile releasing a string of devices, soon to hit the market.”

The Top 5 Smartphone-Enabled Bracelets of 2014

With superior sleep-tracking, the Fitbit is the preferred choice. The community / visibility functions of Fitbit are great at generating friendly rivalry / compeitition which encourages over-acheivers to up the ante. It has an excellent battery life and its Bluetooth and NFC-enabled wireless syncs easily to smartphones. Comfortable, light and stylish, the Fitbit allows interchangeable bands in several different colours to accommodate individual style.

You can pick one up from OfficeWorks or any Apple store. We recommend Apple, as their 14 day returns policy provides a great way to ensure you truly like the product you have bought.